A downloadable pig game for Windows, macOS, and Linux

An action strategy pig game where you play as a legion of militant Roman Pigs, sent to conquer the villages of Germanic Boars.  Capture prisoners, loot their homes, defeat their leader Boarminius!  Bring Glory to the Roman Pig Empire!

All controls are rebindable in the options by pressing Escape.

The first level is a tutorial which explains the following. But in case you missed something:
After defeating a barbarian boar, it will start crawling to the nearest hut. You can walk next to the crawling boar and press E to recruit it into your pig army.

To progress further you have to destroy all the huts by sending soldiers to them. They will bring back coins. The total amount is written on the flag carrier.
Every pig will cost money during battle, so try not to grow your army too much or they will become deserters if you can't pay them!

All the assets have been made specifically for this game during the jam, except for
- most sounds which are from the GameAudioGDC bundle by Soniss (https://sonniss.com/gameaudiogdc) 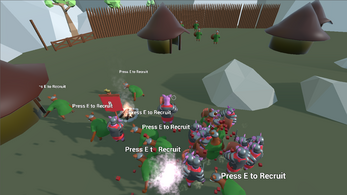 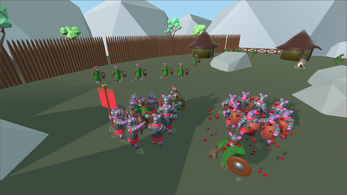